Guest houses in Pavolche, hotels near Vratsa. Rural and eco tourism in Pavolche. 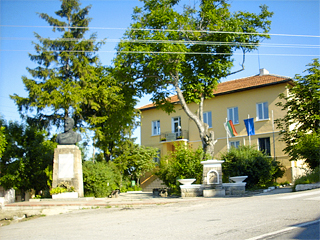 Pavolche is 3 km away from Vratsa and it is situated at the foot of the Vratsa Mountain. The current name of the village is found for the first time in Ottoman documents from 1430, and in the area there are remains of ancient tombs next to an ancient Roman road, pottery water pipelines from Roman times, remains of an Early Christian Temple and coins, proving that there has been life here since ancient times. There is a mound necropolis in the region, testifying for an agricultural estate of an aristocratic Thracian family and the warriors of the Tibaski Thracian king were buried in the mounds. The history of the village is closely linked to the tragedy of Botev Revolutionaries and their last battle was very close to it - at Mount Okolchitsa. Many of the rebels found their death in Pavolche, too. There is a 35-metre monument at the top of the mount, and there is a natural rock with an inscription in the hollow of Yolkovitsa, showing the place of death of Botev. In the village one may also visit the Church of Saint John of Rila which was built in 1932. The natural resources are preserved in Pavlovche and together with the traditions, customs and folklore they create local conditions for alternative forms of tourism, such as eco and rural tourism. Guests may stay in one of the guesthouses in Pavolche where the menu is traditional and all the dishes are home produced from the garden of the owners. Pavolche hotels are a good alternative to the hotels in Vratsa because the village is only 3 km from the city. In the surrounding area there are natural attractions, such as the Shopkata Waterfall, rock formations of Alyosha and the figure of the awaiting mother next to it, as well as the Dyado Yancho Formations situated below mount Okolchitsa and the cliff top of Vezhdata with a natural bee hive in the rock. In the area of Pavolche there are many caves, such as Pukoya, Dyadovata Dupka, Pchelishka Dupka, Borkova Dupka and so on. There are opportunities for different attractions, such as the amusement park of Prikazka, offering bowling, mini golf, archery and air rifle, as well as competitions of rock climbing. Pavolche is a part of the Vratsa trail of Borov Kamak, reaching Mount Parshevitsa that offers good conditions for skiing in the winter.

Address: 6 Vejen Street
Phone: +359 9189 270
more informationlocate on map
Guest House Julia is situated in the wonderful village of Pavolche, 4 km away from the town of Vratsa. Once its guests arrive at the house, they will immediately feel at home. Here they will be charmed by the ecologically clean and delicious meals, the warm hospitality of the proprietors Angel and Julia as well as by the authentic atmosphere of the house. Guest House Julia is easily accessible and easy to find at any time of the year. Every guest will discover in this house the holiday place of their dreams.
Hotels near Pavolche