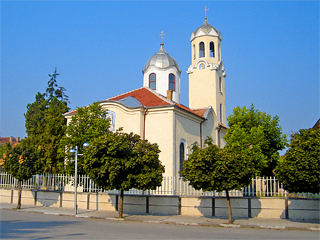 Pavlikeni is located in the center of North Bulgaria, about 70 km from Pleven and 36 km from Veliko Tarnovo. There are traces of the prehistoric man found in the region, but the town hardly emerged in 1943 at the place of the village of Pavlikyan whose population professed the Paulician religion. An ancient ceramics centre is discovered near it where there are furnaces for construction and domestic pottery, as well as a Roman villa. It dated to the late first century. The over 50 furnaces found prove that here ceramic products were made not only for the needs of the population, but also with commercial purpose. The researcher of the centre Bogdan Sultov turned it into an open air museum and restored the entire process of production. Other antiquity artifacts may be seen in the Historical Museum of Pavlikeni. There are columns, tombstones, inscriptions exposed in the yard, as well as other objects found in this region. There is a unique exhibit in the Revival Section - a Perpetual calendar, created upon the idea of Father Matthew Preobrazhenski - Mitkaloto. There are also natural attractions in the area of Pavlikeni that attract lovers of hiking and ecotourism. The Troana Cave is attractive. It is situated in a highly wooded area, and it is interesting for its wealth of non-flowable cave formations. So far only 1500 metres are mapped. There is a kind of micro complex - Musinskiya Karst Spring in the area of Musina Village. Along with the spring, one may see the Roman catchment area to Nicopolis ad Istrum, trout fishery, water cave, historical monument, old mills and so on. The complex is a unique combination of nature, history and business. There mineral springs on the territory of Pavlikani having proved healing qualities, which is why spa and hydro procedures are offered, and the lack of environmental pollutants around together with the interesting natural and historical sites, creates good conditions for rest and recreation. Still the accommodation base is not well developed, but the future envisaged a growing number of the hotels in Pavlikeni. Currently, the town has a spa hotel and a family hotel.

Address: 7 Gotse Delchev Street
Phone: +359 610 55535
more informationlocate on map
Park-Hotel Bora is a jewel in the heart of the mountain. Situated on a hill above Pavlikeni amids a beautiful pine-tree forest, this hotel offers a high-quality stay and provides numerous opportunities for pampering the body and senses. The three-star Park-Hotel Bora is distinguished for its perfect conditions for rest, splendid restaurant and professional balneological services for relaxation as well as for the treatment and rehabilitation of different kinds of diseases.
Hotels near Pavlikeni