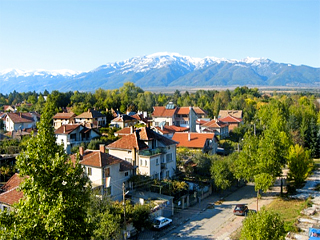 Pavel Banya is а known SPA resort, situated in the east of the Rose Valley and the Valley of the Thracian Kings, between Sredna Gora and the Balkan Mountains, just 25 km from Kazanlak and near the Koprinka Dam. The town is relatively young, it emerged only after the Liberation, but the lands around were settled and the water has been used for treatment since ancient times. This is proved by the remains of an ancient town, Roman baths and facilities, found around the mineral springs. Ten Thracian mounds were found at all four sides around the mineral springs. The town is named after Saint Paul and Prince Paul - brother of the Russian Tsar Liberator. Today Pavel Banya is an established SPA resort because of the powers of the local water to heal various deceases. The hydro-thermal springs are nine; seven of them have a temperature of 50 to 61 degrees, with low mineralization and weak alkalization. There are rehabilitation centres for prevention, treatment and rehabilitation of disorders of the musculoskeletal system, central and peripheral nervous system in Pavel Banya. Besides the SPA treatment method, the centres also use underwater traction, underwater massage, paraffin treatment, remedial gymnastics, electro and light treatment, diet, etc. The established base and favorable climate allow year-round holiday. While not doing treatment procedures, the guests may explore the sights of the Pavel Banya region. The following landmarks are of interest: the Nativity of the Virgin Church, the Mother Monument, the wood carving of the dried Elm, etc. There are festivals, carnivals and other similar events in Pavel Banya, but the most interesting is the Festival of the Rose and Mineral Water when a Rose Queen and a King of the mineral water are chosen during a carnival. The river of Tunja flows near the town and together with the Koprinka Dam it offers good opportunities for picnics, boating and fishing. For guests of the town there are many guest houses, family hotels and lodgings that offer low cost accommodation and all modern conveniences. Numerous specialized SPA institutions and SPA hotels operate in Pavel Banya.

Address: 2 Knyaz Pavel Street
Phone: +359 888 861125
Website: http://www.hotel-kavrakovi.com
more informationlocate on map
The three-star Hotel Kavrakovi personifies everything good that guests may expect from a family hotel - personal attendance, casual and laid-back ambiance, impeccable cleanliness, home-like coziness, various amenities and all this at very reasonable rates. Family Hotel Kavrakovi is ideally situated in the center of Pavel Banya close to the town park and all major balneal and spa centers of the town. The hotel is an ideal choice for vacations of families with children as well as for holidays of organized groups.
Hotels near Pavel Banya