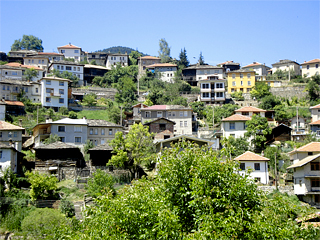 Orehovo is a picturesque Rhodope village, which like an amphitheatre, is located on the hills around the river of Persena and because of that it is often called the Rhodope Veliko Tarnovo. The village is situated near the main road of Asenovgrad-Smolyan, 54 km from Smolyan, 25 km from Chepelare and 60 km from Plovdiv. Once there was a Roman settlement on this territory, and the history of the present day Orehovo is 300 years old. It is known that in the 18th century it was a Muslim village. The area around the village is very interesting for its natural beauties, located in protected areas. In the area of Duplevo one may see the waterfalls in the rocky gorge of the river of Oreshitsa and the second highest waterfall in Bulgaria is located in the area of Skakaloto. Its water falls from 30 metres. The rock massif of Kosten Kamak looks like a huge rock, having a waterfall and it is connected to the canyon in the area of Koylovo Dere. There is a legend about it that the Koylovo residents of the village who did not accept Islam were thrown from here into the abyss during the forced conversion to Islam centuries ago. At the foot of the rock there are many bones found and this gives the name of the area. The Natural Phenomenon of Vaklite Dupki near Orehovo represents rock formations covered with calcite. A part of this complex is Cheleveshkata Cave, where during the Ottoman rule the majority of the population of Orehovo was burnt and killed. Other attractions near the village are Persenk Mount, the Roman road built on an ancient Thracian road that is preserved until today, the natural phenomenon of Chudnite Mostove, formed by a passing river that has carved the walls and arches of a deep cave. The location of Orehovo enables it to be the centre of tourist routes to all destinations in the Rhodope mountain and especially it is a starting point for trekking to the huts of Persenk, Kabata, Skalni Mostove, Chudni Mostove, the mountain resort of Byala Tsarkva, etc. The lovers of cave tourism may benefit from the routes to the caves of Cheleveshka Dupka, Kerina Dupka, Dankina Dupka, Lengaritsa, Imamkaya and the religious tourism lovers may visit over 30 chapels and sanctuaries in the village and its surroundings, such as the chapels of the Nativity of the Virgin Mary, Nativity of Christ and St. Peter and Paul, the sanctuary of St. Anne and so on. There is an organised Trans-Rhodope eco-route from the village of Hvoina, passing through Orehovo, Pamporovo, the village of Turyan, the village of Arda, the pass of Elidzha, ending at the town of Stavroupoli in Greece, lasting 14 days. The proximity of Chepelare allows winter sports and skiing in winter. Those who wish to enjoy the timeless beauty of the Rhodope Mountains and indulge in the unearthly peace and quiet may stay in one of the family hotels in Orehovo, cosy guest houses and mountain villas that have fabulous panoramic views revealing the neverending rolling hills of the mountain.

Villa on the Top

Phone: +359 887 645284, +359 897 061996
Website: http://vila-na-vurha.free.bg
more informationlocate on map
Villa on the Top is a beautiful two-storey house in the picturesque village of Orehovo in the Rhodope mountain range, 40 km from Pamporovo and 60 km from Plovdiv. The house in the highest area of the village and from its beautiful garden are revealed stunning views of the mountain. The villa is a convenient home base for hiking, trekking and visiting the local attractions. Here every guest will enjoy warm-hearted hospitality, home-like cosiness, delicious home-cooked Rhodopean dishes and amazingly beautiful nature.

Guest House Dima
Phone: +359 896 627826, +359 32 293627
more informationlocate on map
Guest House Dima is a two-storey house located on a picturesque spot in the Rhodope village of Orehovo. The house accepts guests throughout the whole year and is a wonderful choice for those visitors who want to taste the peaceful way of life in the village and get in touch with the magnificent nature of the Rhodope mountain. At the same time Guest House Dima has all the facilities of today, which guarantees its visitors security, comfortable stay and complete rest.
Hotels near Orehovo