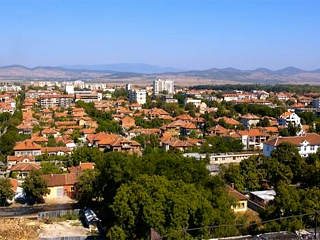 Nova Zagora is located in the Upper Thracian Valley, 37 km from Sliven and 32 km from Stara Zagora. The earliest traces of life in these places are from 7-6 century BC and they were found in the survey of mounds, such as Novozagorskata, Gyundiyskata, Karanovskata, etc. which are numerous and characterize the area as the richest one of settlements of this kind in Bulgaria. There are 156 cultural monuments within and around the territory of Nova Zagora, but the most interesting ones are the Karanovska and Dyadovskata mounds. The Karanovska mound is one of the oldest in Europe and it embodies all the ancient eras - from the Neolithic to Bronze. With a few interruptions there was life in these places from the seventh millennium BC to the middle of the 13th century. A round seal was found that contains the first stages of writing at all. The Historical Museum of Nova Zagora stores a unique exhibition of Thracian chariots, and here there is the largest quadricycle in the world, found near the village of Korten. The historic sites in the area are of interest, too. The village of Stoil Voivoda is near Nova Zagora. It is the birthplace of the chieftain Stoil. There is an over 100 year old church there, too. The village of Zagortsi is near, as well. One of greatest Bulgarian freedom fighters - Panayot Hitov was born there. There was a church in Zagortsi back in 1835, and in 1858 a church school was opened. In addition to the cultural and historical monuments, the tourists have conditions for eco and rural tourism, fishing and hunting. There are hunting fields built in the area of Nova Zagora, as well as fishing ponds, attracting tourists not only from the country, but also from abroad. The international hunting and fishing are a tradition. In the nearby village of Banya there are thermal springs and spa tourism is developed, and the cultural traditions of the region are very attractive and create conditions for rural tourism. In order to get acquainted with the nature, cultural and historical attractions in and around the town, there are interesting tourist routes for the town visitors. The selection of hotels in Nova Zagora is good, but if by chance all the accommodation base is busy, a good alternative are the hotels around the Zhrebchevo Dam, the guesthouses in the village of Banya, Chernogorovo, etc.

Address: 56 Vasil Levski Street
Phone: +359 457 25691, +359 888 866930
Website: http://www.hoteltriumph.com
more informationlocate on map
Hotel Triumph is a nice two-star hotel located in a beautiful four-storey building on the main street of the town of Nova Zagora. To its visitors the hotel offers impeccable service and incomparable comfort during the whole year. In the eleven pleasant rooms of Hotel Triumph every guest of the hotel will enjoy a well-deserved rest, homely coziness and secure tranquility. For the additional comfort of its guests the hotel provides free parking area and a food store to those who prefer to prepare their own meal.
Hotels near Nova Zagora