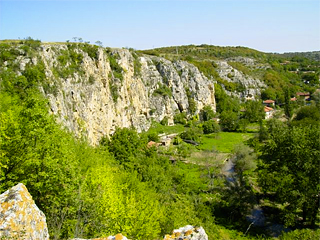 Nisovo is located about 25 km from Ruse, in the heart of the picturesque Nature Park of Rusenski Lom. The village was founded by settlers during the Ottoman rule, and its name comes from 'iso', which means 'cold, clear water'. The nature around Nisovo is very beautiful and the village has an interesting and ancient history which attracts tourists. A Roman road went by it, where there are Roman cemeteries with stone crosses, containing inscriptions of the age, social status and occupation of the deceased people. It is assumed that they are of the Knights Templar of 12-13 century. Another attraction in the area is the rock monastery of St. St. Constantine and Elena, known for its beautiful rock paintings. It is located in the rocks at the Malak Lom River. The Jewish Hole is opposite the monastery, where there were rescued Jews during the Second World War, and near it there is a rock formation called 'barber' because it looks like a barber's chair. There is a beautiful view revealing from the rocks towards the Rusenski Lom Nature Park. A medieval Bulgarian town is situated 15 km from Nisovo. It was one of the most significant military, administrative, economic and cultural centres during the Second Bulgarian State. It was declared an archaeological reserve and it is an attractive tourist site. Other sites of interest are the monastery complex of St. Archangel Michael in the village of Ivanovo, representing rock churches and monk cells protected by UNESCO; the Rock Monastery of St. Dimitar Basarbovski from the 15th century which is permanently operating, situated next to the village of Basarbovo and so on. A venerable white elm grows near Nisovo and there is a legend that if someone writes a wish on a piece of paper and tosses it in the nearby river, the 'grandfather Elm' will make it true. Nisovo is a wonderful place for tourism because of its proximity to the park of Rusenski Lom which is insulated and has a various topography, microclimate, rich biodiversity and protected species. There are opportunities for practicing biking, cave and hiking tourism, rock climbing and canoeing in the river. There is a hunting reserve and a winery, and picnics may be organized along the river. The village has preserved its traditions and the festivals are still celebrated in the old and original way. For those wishing to stay in the village, there are a few guest houses and family hotels in Nisovo. The nearby hotels of Ivanovo, Basarbovo, Ruse offer alternative accommodation.

Guest Houses The Four Pines
Phone: +359 885 578649, +359 8196 212
Website: http://www.the-four-pines.com
more informationlocate on map
Guest Houses The Four Pines in Nisovo are an excellent choice for every person keen on nature, outdoor activities, history and archaeology. Part of a newly built complex reminiscent of the style of the Bulgarian houses from the 19th century, the two houses are a place suitable for accommodating visitors of Natural Park Rusenski Lom, who are looking for comfort and complete privacy during their stay. Guest Houses The Four Pines can be found in the village of Nisovo offering home-like coziness and warm hospitality.
Hotels near Nisovo