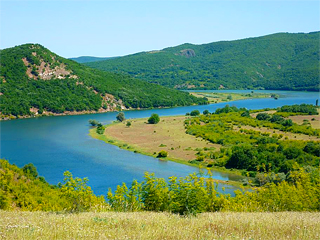 One of the smallest towns in Bulgaria - Madzharovo is located on the banks of the Arda River in the Eastern Rhodopes, 65 km from Haskovo. The settlement has had the name of Yatadzhik for centuries, meaning "valley", "lair", but in appreciation of the great chieftain Dimitar Madzharov, it was called Madzharovo. There are numerous Thracian cult and memorial complexes nearby that are of interest to fans of archaeological tourism. Among the most famous ones are Hisarya, Okopa, Efrem, Gluhite Kamani, Sivridikme-Furnadzhika, and the cult facility of Kromleh - the Bulgarian Stonehenge, the Roman road and the Thracian rock niches of Hambarkaya. One of Madzharovo business cards are the beautiful meanders of the Arda River in its surroundings, forming a unique landscape. They are easily accessible for anyone wishing to visit them and they offer fabulous views. They are suitable for off-road and photo safaris. There are protected areas in the region of Madzharovo, too, such as, Gyurgena, Momina Skala and Chernata Skala. There are volcanic rock formations in Gyurgena, including caves that shelter three worldwide protected species of bats - the greater horseshoe bat, south horseshoe bat and Geoffroy. There are deposits of orchids and lilac stones, wild horses, vultures and many more in the area of Momina Skala. The natural phenomenon of Kovan Kaya includes majestic rock formations and open lands and protected areas, preserving rare and endangered species. The Griffon and Egyptian vultures are breed here, as well as the black vultures, called card which represent an impressive sight in the spring. It is namely the monitoring of the raptors in their natural environment that is one of the biggest attractions of Madzharovo. There is a special visitor centre as the ornithologists have different opportunities to enjoy nature in its various aspects. There are well-marked hiking trails in Madzharovo, leading to all natural and archaeological sites. The Ivailovgrad Dam is located not far from the town, offering good conditions for water sports and fishing. The selection of hotels in Madzharov is not great, so anyone who wants to stay in the town should reserve a room in a hotel in Madzharovo in advance.

Address: 48 Dimitar Madjarov Street
Phone: +359 3720 2230, +359 889 614198
Website: http://www.hotelraibg.com
more informationlocate on map
Hotel Rai is a three-star hotel in Madjarovo, located along the banks of river Arda, close to the Ivaylovgrad Reservoir. It offers very good conditions for holidays and business amidst the unspoilt and stunningly beautiful nature of this part of the Eastern Rhodope mountains. Despite whether they visit the town for business or leisure, the guests of this classic hotel in Madjarovo may enjoy a wonderful combination of modern day comfort and professional service in the surrounding of unique natural and historic phenomena.
Hotels near Madjarovo