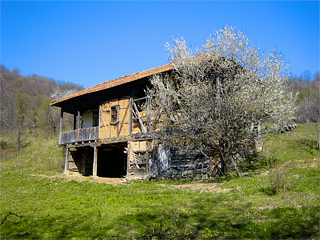 The picturesque village of Lopyan is located 15 km from Etropole at the foot of the Balkan Mountains. This is one of the oldest villages in the region, inhabited even during the Thracian Period by the tribe of Luposi. This is proved by the ruins of the Thracian fortress of Cherti Grad, which means "devil town", located in the area of Trasishteto 3 km from Lopyan. The fortress dates to the 4-3 century BC. It was surrounded on three sides by cliffs and the housing and sanctuary were situated behind the walls. There is a niche in the rocks next to it which was intended for meeting the Sun. The area around the Cherti Grad is a part of Natura 2000 in order to protect the forest vegetation and the complexes in the rocks which are home to rare animals and birds of prey. An interesting landmark in Lopyan is the small church of St. Peter and Paul, built in 1858-64, over the rocks, revealing a beautiful view. Near the village there is the protected area of Orlov Kamak - Chervenata Stena where rare birds live. Lopyan is ideal for hiking through the Etropole Balkan. In the area of Vranya Voda, located above Lopyan, there is a beautiful waterfall, 15 m high. It can be reached though the next village of Yamna and though a trail in the woods. Longer trips can be made to Cherti Grad though the area of Cherna, passing along the river with its canyons, waterfalls and rock mushrooms. There is another route that is to the hut of Svishti Plaz for about 5 hours. There are two rivers running around the village - the Stara River and Svinska River, suitable for fishing and picnics. There is trout, barbel and other species. The rivers used to power 18 mills and some of them have already existed for over 300 years. There is deer, wild boar, foxes and many more for the lovers of the hunting in the woods. The Etropole Monastery of the Holy Trinity is not far from Lopyan, near the village of Yamna. It has preserved antique and unique items from the ancient times and in the town of Etropole one may see different sights. To enjoy a holiday close to nature, one may stay in the only hotel in Lopyan at the time which offers very good accommodation. The huts near Lopyan are suitable for those who wish to hike.

Phone: +359 877 626966
Website: http://www.orlovaskala.com
more informationlocate on map
Holiday Village Orlova Skala in the village of Lopyan, Etropole Municipality, is a wonderful choice for a holiday in the mountain for every connoisseur of intact nature and unbeatable tranquility. Located on the banks of the river Stara reka, only a kilometer after the village of Lopyan, Holiday Village Orlova Skala accepts guests throughout the whole year and offers cosiness, comfort, quality cuisine and various opportunities for active rest and entertainment. The area is ideal for mountain, eco and cultural-historic tourism
Hotels near Lopyan