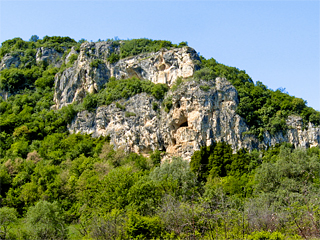 Koshov is a small village on the territory of the Rusenski Lom Natural Park. It is located on the left bank of the Cherni Lom river, which forms a beautiful gorge in the karst rocks, which picturesquely surround the village. Only 5 km from north-west of here is located the municipal center Ivanovo and after two more kilometers are located the famous Ivanovo Rock Churches. This hesychast complex, which date back to the Middle Ages, and more specifically - to the period of the Second Bulgarian Kingdom, is truly priceless not only because of its location and architecture, but also because of its mural, for which it is listed in the UNESCO world heritage list. Another similar complex is the Basarbovo Rock Monastery, set 15-16 km from Koshov towards Ruse. The medieval town of Cherven is no less attractive for visits. It is sitauted 8-10 km south of Koshov and impresses with its grandeur. It also dates back to the Second Bulgarian Kingdom period, when it was deemed the second most important city after the capital Tarnovo. Rusenski Lom Natural Park boasts not only unique cultural-historical heritage. The rivers on its territory have formed splendid gorges and canyons, which some sources compare to the great Colorado Canyon in the US, but of course - a smaller version of it. The specific relief of the area has led to the formation of specific flora and fauna. Here may be observed rare and protected bird species, invertebrates, clams, fish, amphibians and mammals. Here are located the only habitats of the Verbascum dieckianum Borb and the Polygala sibirica L. in Bulgaria. The land of the Koshov village is inhabited since Antiquity. First the Thracians settled here and then the Romans,, Slavs and Bulgarians. Remnants of Thracian sanctuaries and Roman fortresses may still be seen today. The village itself was established in the 15th century. For the first time its name was mentioned in an Ottoman document from the same century. There are several versions for the etymology of the name Koshov. The first is related to the numerous hinds (koshuta), which lived around the village back then. In addition, ancient legends often relate the hind to the Mother of God. A second version states that the local population has reached true mastery in weaving baskets (koshove) and thus the name emerged. The third one takes into account the location of the village - at the foothills of steeping rocks as if in a basket (kosh).

Phone: +359 887 604644
Website: http://www.milkovata-kashta.com
more informationlocate on map
Milkovata House in the village of Koshov is a wonderful choice for a holiday of everyone who wishes to enjoy the eternal beauty of Natural Park Rusenski Lom and visit some of the most precious cultural-historic attractions of Bulgaria such as the Ivanovo Rock Churches and the medieval town of Cherven. Here every guest will discover home-like cosiness, warm hospitality and vaious modern amenities, which guarantee complete relaxation and enjoyable stay.

Villa Angel
Address: 17 Otets Paisiy Street
Phone: +359 878 488801, +359 82 854020
more informationlocate on map
Villa Angel offers splendid opportunities for a vacation in a unique place. It is situated in the village of Koshov next to a beautiful canyon in the natural park Rusneski Lom. From the villa is revealed a magnificent view of the vertical rocks of the canyon, limestone swaths, multitude of meanders, caves and niches in the rock. Here nature is still unspoilt and delights every visitor with unforgettable moments and experiences. The region has many interesting things to offer and guests will certainly won’t be bored.
Hotels near Koshov