Hotels in Kazanlak, guest houses and family hotels in the Valley of the Thracian Kings and the Rose Valley. 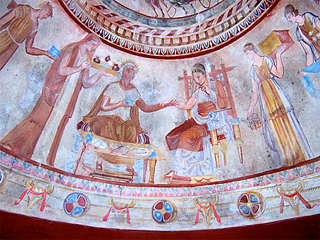 Kazanlak is the very heart of the Rose Valley, located between Stara Planina and Sredna Gora. The most typical feature of the area is the production of rose oil, which is widely used in perfumery, cosmetics and pharmaceuticals. The proper temperature, humidity and sandy soil conditions were favorable for the cultivation of oil rose, which was brought from India to our lands. Besides the Rose Valley, the area around Kazanlak is also called the Valley of the Thracian Kings because the most unique and globally significant Thracian mound tombs are found in the region. The first major discovery is the Thracian tomb of Kazanlak where the son of the Thracian king Seuthes III - Roigos was buried and the paintings inside show information about the life and traditions of the Thracians. It is the first Bulgarian monument, which is listed as a World Heritage Site by UNESCO. Another discovery made by Professor Georgi Kitov is the temple in the Golyama Kosmatka Mound, where they found evidence that Seuthes III was buried there. He was the ruler of the Odrysian kingdom. There are about 1500 registered Thracian burial mounds in the valley, as only about 150 of them have been explored and excavated. The Koprinka Dam is close to Kazanlak and there, at its bottom, lies the ancient Sevtopolis - capital of the Odrysian Kingdom. These and other discoveries and historical monuments make Kazanlak an attractive place for Bulgarian and foreign tourists. The world's only Rose Museum is situated here. The visitors can observe the process of extracting rose oil; see the first laboratory for quality control, tools and more. Almost 100 000 exhibits from the Kazanlak region are preserved in the Iskra Historical Museum. Near Kazanlak is located the national park-museum of Shipka-Buzludzha that combines the National Park Museum of Shipka, the National Park of Buzludja and the Monument of Victory near the village of Sheinovo and the Birth of Christ church in Shipka that was built in memory of the dead Bulgarian volunteers and Russian soldiers during the battles for the Shipka Pass. Visitors to the town may also visit the Ethnographic complex of Kulata that contains monuments of the Revival era; the house of Chudomir, declared a museum after his death; the house-museum of Acad. Dechko Uzunov; the house-museum of Prof. Nenko Balkanski; the house of Petko Staynov. Every year events are held in Kazanlak that attract visitors to the town, such as the Rose Festival, Chudomir holidays, Musical Feasts of Acad. Petko Staynov and others. Those who wish to enjoy the unique natural, cultural and historical wealth of Kazanlak and the region may stay at a variety of accommodation sites according to their taste and budget. Besides classic hotels in Kazanlak, town guests may choose from cozy guest houses for their comfortable stay, as well as family hotels, holiday cottages and chalets. Good alternative to the hotels in Kazanlak are those that are located along the Koprinka Dam and the villages of Enina and Srednogorovo.

Address: 16 L. Kabakchiev Street
Phone: + 359 431 64272, + 359 886 027047
Website: http://www.hotelteres.com
more informationlocate on map
The two-star Hotel Teres is a superb place to stay in Kazanluk for both business and leisure traveler. Because of its convenient location at five minutes on foot from the town centre and at the entrance of the park Tyulbeto next to the Ethnographic museum, Hotel Teres is a preferred place by the town guests. Here everyone will take delight in the warm hospitality, tasty meals and the pleasant clean rooms. The highly qualified personnel guarantees a perfect stay.
Hotels near Kazanlak