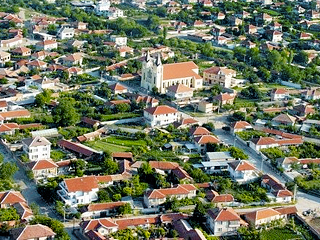 Kaloyanovo is an Upper Thracian village, located about 16 km from the Trakia Highway and 24 km from Plovdiv. Its territory has been populated since the 8-5 century BC by Thracian tribes and the area around it was included in the Odryses Kingdom, founded by the Thracian King Teres I. In the vicinity of Kaloyanovo, there are remains of the first centre of the kingdom where the imperial palace was located. The largest prehistoric settlements on Bulgarian territory are also located here. These are the Kamshikova and Cheradzhiyska mounds, the Thracian and Roman settlements of Bendipara and Severius. During the Ottoman rule the village was called Seldzhikovo and in 1934 it was renamed in honour of the Bulgarian King Kaloyan. The Holy Trinity Orthodox Church, consecrated in 1845, may be seen in the village, as well as the Catholic Church of St. Andrew the Apostle in Neo-Gothic style together with the monument Chapel of the Virgin Mary. In Kaloyanovo there is a monument of the people repressed and killed during the communist regime, having the shape of a large cross with a silver bell, as well as a monument of the ones who perished during the anti-fascist resistance and the Patriotic War which resembles the Mount Shipka Monument. There is a racing trace, built in the place of the old agricultural airport. It hosts numerous auto and moto competitions, gaining more and more popularity among the fans of these sports. Every year two rounds of the National Tourist Cars Championship are held here. There are also periodical fairs, tuning shows, training and amateur championships. There is a restaurant next to the track, a new platform and security zones, and an expanded parking. The advantage of this racing circuit in Kaloyanovo is that it is in the centre of the country and it is available to viewers across the country. An interesting tradition may be seen in this village near Plovdiv on February 11th, the day of Saint Vlas, when the Mufkanitsa celebration is held - the festival of horned cattle. On this day wood is gathered and lit at each intersection, and pedestrians have to jump over the fire for health. Animals are bedecked with bread and bagels and the hosts give bread and cheese so that the livestock can multiply. There are family hotels in Kaloyanovo for the tourists in the region, as well as guest houses. The hotels in Plovdiv are a good accommodation alternative.

Phone: +359 3123 2306, +359 3123 2303
Website: http://www.sarayhotel-bg.com
more informationlocate on map
The four-star Hotel Saray is located 4 km from the village of Kaloyanovo on the main road Plovdiv-Karlovo. Here guests will discover perfect service, luxurious environment and peacefulness. The architecture and the interior of Hotel Saray are dominated by elements of the Oriental style. The endless open space revealed from the hotel park, the serene atmosphere of all premises as well as the comfort of the rooms guarantee complete and pleasant stay in Hotel Saray.
Hotels near Kaloyanovo