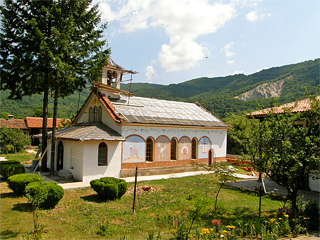 The town of Botev - Kalofer - is located in the southern part of Stara Planina, 56 km away from Plovdiv and 164 km from Sofia. According to the legend Kalofer emerged when a chieftain named Kalifer and his group settled at these places. They attacked a passing Turkish caravans and the Sultan, after failing to deal with him, was forced to allow the rebels to settle down if they'd stop attacking caravans. Later with the years the town enlarged and enriched and because of that it was called Altin Kalofer which means Golden Kalofer. There are museums in the town that tell not only regional but also national history. The National Museum of Hristo Botev includes a memorial house-museum, an exhibition hall, a monument of Hristo Botev and a monument of Ivanka Boteva - the mother of the poet. The atmosphere, in which the family lived, may be seen in the house, and there are personal belongings in the showroom, as well as documents and others. Another landmark is the School of Daskal Botev, one of the first in Bulgaria from the Revival period. Here reproductions are made and visitors can feel the atmosphere of that time. The third museum is the Kalofer House of History which is an ethnographic centre and presents local and traditional weaving rugs, clothing and festival costumes. There are several Eastern Orthodox churches in Kalofer, but the male and female monasteries of Kalofer are the most important. The town is located in the Central Balkan National Park and the highest peak in the Balkan Mountains - Botev Peak is in its territory, as well as the Raiskoto Praskalo Waterfall, which is the highest one in Bulgaria. There are beech forests growing in the park, as well as deep canyons, waterfalls and spacious pastures. One of the largest reserves in Bulgaria is situated here - the Dzhendema Biosphere Reserve. Kalofer is one of the most picturesque places in Bulgaria and its surroundings provide opportunities for recreation and there is a possibility for picnics in the summer on the banks of the two rivers - Tundzjaa and Byala Reka. The fresh air and the climate here attract people with respiratory problems, and for hikers there is the Byala Reka Eco-Trail which is a part of the same name complex, including a children's centre and a camp for survival in nature. There are routes to the Rai Hut and Botev Peak. Equestrian tourism is also developed in Kalofer and it is organized by different routes. The town and surrounding area provide a good choice of accommodation. A big plus is that there are no big hotel complexes and so the charm of the town and the beauty of nature are unaffected. The Kalofer hotels are mainly family ones. Many guest houses are also available to tourists that recreate the original atmosphere of the revival city. There are a lot of huts near Kalofer for the lovers of trekking.

Address: 30 Kalifer Voyvoda Street
Phone: +359 898 743851, +359 886 815721
Website: http://www.balkanibg.com
more informationlocate on map
Guest House Kalofer is centrally located in the town bearing the same name. It takes up the first floor of the only house in town with a panoramic view of the mountain and the complex dedicated to Hristo Botev - one of the greatest national heroes of Bulgaria. The guest house offers three double bedrooms and a living room. They may use all available kitchen utensils and the barbecue in the garden. Organized groups and whole families may rent the whole floor of the house and thus enjoy complete privacy.

Villa Mechkarev
Address: Panitsite Locality
Phone: +359 3133 5855, +359 878 647880
Website: http://www.mechkarev.com
more informationlocate on map
Villa Mechkarev is a very good choice for every fan of the active holidays in the mountain in every season as well as for the connoisseurs of the Bulgarian history and beautiful nature. Located 3 km from Kalofer in the Panitsite locality, the guest house is a convenient home base for trekking to the Raisko Praskalo waterfall, the Rai hut, peak Botev, for picnics and eco hiking in National Park Central Balkan. The villa is open year-round and offers cosiness, comfort and warm hospitality at reasonable rates.

Address: 18 Vasil Levski Street
Phone: +359 3133 5846, +359 898 699800 +359 877 322218
Website: http://www.kalofer-ekotur.com
more informationlocate on map
Guest House At Chorbadjiikata is a cosy guest house in Kalofer, which is located on a quiet and peaceful street close to the town center. Here every guest will enjoy warm hospitality, home-like cosiness and comfort, delicious home-cooked meals and tranquil ambiance. This hospitable guest house in Kalofer offers exceptionally attractive rates for accommodation and accepts guests throughout the whole year. It is suitable for families with children, couples and organized groups of friends.
Hotels near Kalofer