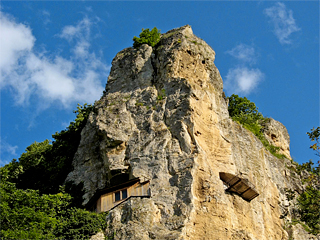 Ivanovo is located 16 km from Ruse, in the picturesque valley of the Rusenski Lom River. Near the village, in the area of Pismata, there is a complex of medieval rock churches that has an archaeological reserve status and the temple known as the Church is protected by UNESCO for its unique murals. The foundation of the complex began in the 12th century during the reign of Patriarch Joachim I from Tarnovo and it is supposed that Tsar Ivan Asen II financed the construction of the monastery of St. Archangel Michael. There were 41 temples in the monastery and about 102 rooms. There is evidence that it was patronised by the Bulgarian kings. It is supposed that Georgi Terter was buried in one of the premises and there is a Donors portrait of Tsar Ivan Alexander and his wife Queen Theodora in the church built in 14th century. There are painted scenes from the last days of the life of Jesus Christ on images in the church, as the frescoes are very realistic. Though the Ivanovo Rock Churches are a symbol of the village, its visitors have endless opportunities for tourism in the region. One of the major landmarks in the area is the Grand Canyon of the Rusenski Lom River, where the rock churches are also located. Unlike other canyons in the world, located in mountainous and hilly areas, this one is located in a plane; there are many curves, steep and vertical cliffs and rock formations with many caves and niches. This is an oasis of wildlife and is therefore included in the Rusenski Lom Nature Park. The Orlova Chuka Cave is located 24 km from Ivanovo, where during a study some remains of cave bears were found. Its name comes from the rock crown above the entrance and there are different species of bats there, including a squeaky bat which is a species for Europe. 124 stone steps lead to the cave, and approximately 3 km of it may be seen and the visit has to be obligatorily made together with a guide-speleologist. The first hall is called the Concert because of the good acoustics and concerts are often held there. In the cave one may see interesting formations with whimsical shapes and names. There are various family hotels in Ivanovo and guest houses, providing good conditions for accommodation at affordable rates for everyone who wishes to stay in the village. A good alternative to the hotels in Ivanovo are the places for accommodation in Nisovo, Basarbovo, and Ruse.

Polomie Lodge
Address: 1 Pirin Street
Phone: +359 876 280880, +359 811 62772, +359 878 540183
more informationlocate on map
Polomie Lodge is located in the village of Ivanovo at 18 km. from Rousse. It is owned by the family of Kath and Allen Maher from England. They have been overwhelmed by the generosity and hospitality of Bulgarians, their traditions and customs, the beautiful nature. Therefore in 2005 they have bought Polomie Lodge and moved to live in Bulgaria. The house and its yard are turned into a piece of heaven where every guest will be cordially welcomed and comfortably accommodated.
Hotels near Ivanovo