Hotels in Galabovo for business and holidays, hotels near Rozov Kladenets Reservoir. 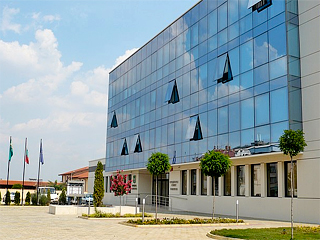 The small town of Galabovo is in the southeastern part of the Upper Thracian Valley, located about 45 km from Stara Zagora and 250 km from Sofia, on both sides of the Sazliika river, a tributary of the Maritsa river. One of the most direct roads linking Romania to Turkey and Greece goes through here - the main E85 road from Rousse to Kapitan Andreevo. These lands were settled early in the New Stone Age, about 5000 BC and some objects from that era were found during the excavations of the mound at the mouth of the Sazliika river. Some Thracian mounds are also preserved: Malova Chuka, Lesova Chuka, Liska Mogila and others. The Erkesiata rampart is located near Galabovo, too. This is a defensive rampart between Medieval Bulgaria and Byzantium, which starts from the Bourgas Lake and reaches the left bank of the Danube river. The facility is visible from the Space today and was declared a cultural monument. Near Galabovo, very close to the village of Glavan is the Balzena fortress. It was an important defensive centre at the crossroads of two major Roman roads - Via Diagonalis and Via Militaris. In literature the area was known as the Balyuzena or Valzena, but locals call it Kaleto or Gradishteto. The Rozov Kladenets Dam is also near Galabovo. It is an important resting place for waterfowl during migration. There are 142 species of birds, 34 of which are listed in the Red Book of Bulgaria, 62 of them are of European conservation importance. Five are endangered species. The dam is of international importance for the wintering of the Pygmy Cormorant, Cormorant, Dalmatian Pelican, Ferruginous Duck and Corncrake. Therefore the Rozov Kladenets Dam is proposed for inclusion in the Natura 2000 network. The annual international wrestling tournament for children Zlati Roidev is a part of the cultural and sports events calendar of Galabavo. This tournament is included in the calendar of the International Wrestling Federation FILA. In May there is a National Folk Festival 'Yanko Petrov', with the participation of rebec players, dance groups and choirs. The town is a good starting point for tourism in the region and transit stay. A limited number of hotels in Galabovo is available for tourist and business travellers, but they offer excellent condition for accommodation, recreation and business. The hotels in Radnevo are an alternative to the ones in Galabovo. They are located about 18 km from the town.

Address: 50 Republika Street
Phone: +359 41 863003
Website: http://www.villaverde-bg.com
more informationlocate on map
Hotel Villa Verde is centrally located in the town of Galabovo. The charming complex will impress everyone with its beautiful garden, unique interior and exquisite style. The highly qualified hotel staff and the unforgettable atmosphere of Hotel Villa Verde are a guarantee for high class service and valuable stay. In the hotel are adequately combined the peaceful atmosphere of nature with all the comforts of the closeness to the town. Hotel Villa Verde can accommodated its guests in a total of thirty five rooms and studios.
Hotels near Galabovo