Hotels in Byala at the beach, apart-hotels and guest houses. 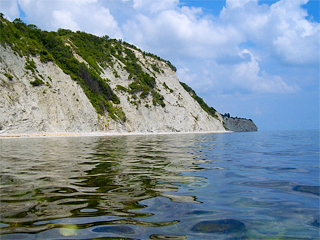 Byala is a resort town located approximately midway between Varna and Burgas, near Obzor. The village was founded in the 4th century BC and was named Aspros. It was first mentioned in an Ottoman register under the name Ak Dere. There is an ethnographic park in the town, and the most remarkable landmark is the paleo-geological formation of Belite Skali. This is one of the four places in the world where one can see the border between the Cretaceous and Tertiary eras, as well as the traces of the cosmic cataclysm that led to the extinction of the dinosaurs millions of years ago. Byala combines sea and mountain climate, pristine beaches and a relaxed atmosphere in a great way and that is why it is a preferred alternative to the big resorts. Here is one of the cleanest and most pristine beaches on the Black Sea which is called "Kara Dere". The area is wild and there is no infrastructure and therefore it is preferred by many tourists. The beach is near the slopes of the Balkan Mountains and at some places it borders the forest. It offers good conditions for surfing and camping. The area of Byala Reka near Byala is one of the wildest places on the Black Sea coast. The jeep safaris, horseback riding, archery and air rifle are a wonderful opportunity for tourists to explore its beautiful scenery and experience the authentic traditions of the region. There are good conditions for wine tourism. Byala hosts the annual festival "Week of the Sea", filled with concerts, theater, folklore, various competitions and so on. The variety of hotels in Byala is good and meets the needs of every guest. Along the coast of the resort, there is a great number of modern hotel complexes, favored by the lovers of first class amenities and hotel services. They are especially suitable for families and all-inclusive vacations. The resort provides numerous apartment hotels in Byala, which combine classical hotel service with all the comforts of the modern private home. Many private houses in Byala offer cheap accommodation - rooms and apartments, and some of them are converted to guest houses.

Phone: +359 514 35006
Website: http://www.byalabeachresort.net
more informationlocate on map
For those who are looking for unobtrusive luxury and excellent attendance, while being close to the gifts of unspoilt nature and superb sea climate, Byala Beach Resort will become synonymous with perfect holiday. The modern Byala Beach Resort will satisfy all tastes and expectations of even the most discerning guests, which will discover in it a genuine oasis of harmony and tranquility, where they may indulge in complete rest and relaxation.
Hotels near Byala