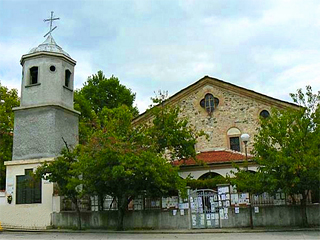 Brestovitsa is located 20 km from Plovdiv, at the boundary of the Upper Thracian Valley and the Rhodope Mountains. Here one becomes a witness of the roots of the Bulgarian spirit and attractive scenery, rich history, folklore and traditions with excellent opportunities for rural, eco and cultural tourism, making it an attractive place for tourists. For the first time Brestovitsa was mentioned in an Ottoman register of 1576 under the name Birestuviche and later it was called Deredzhikyoy. In the village there were found artifacts from a prehistoric settlement of the Chalcolithic period and, as legend states it has existed since the 13th century. There are remains of St. Nicholas Monastery, built during the Second Bulgarian Kingdom. It was burnt down in 1666. The residents are proud of the Church of St. Theodore Tyron, built in 1848 and painted by Dimitar and Nicolas Zograf. It used to gather the whole village before Liberation. Another historical landmark near the village is the remains of the homestead of the Tamrashk ruler Ahmed Aga situated in the area of Bryanovshtitsa. It was his summer palace and a fortress, and there was a tower in its central part. The palace was burned, but the high walls and chimneys are still visible. There is a villa zone in this area with beautiful scenery, clean water, biodiversity and dense forests of pine, fir, hornbeam, hazel, etc. There are over 200 villas there, accommodating thousands of guests and tourists. The main occupation in Brestovitsa has been the production of grapes and wine since ancient times and this creates a condition for the development of wine tourism, and for this purpose there are tasting cellars, gyms and programs that attract lovers of quality wine. There are five major wineries acting here and 40 domestic ones. A hunting party is organized on the territory of Brestovitsa and there is a hunting hut in the Chernatitsa part of the mountain that creates favorable conditions for conducting hunting trips. In the flat area there is quail, wood-pigeon, partridge, pheasant, rabbit, and in the forest area there is deer, wild boar, fox, jackal and wild cat. There is a good selection of accommodation in the village that is extremely diverse. For those looking for luxury and first-class service there is one spa hotel in Brestovitsa which offers self produces wines, too. There are also several family hotels in Brestovitsa, guest houses, and many holiday villas in Bryanovshtitsa that offer lower room rates.

Address: 1 General Gurko Street
Phone: +359 3142 2488, +359 3142 2166
Website: http://www.todoroff-hotel.com
more informationlocate on map
For those who visit Wine and Spa Hotel Todoroff for the first time the hotel will look like a precious discovery. The hotel name stands for unostentatious luxury and exquisiteness, professional service, unique spa services and incomparable opportunities for wine tasting, authentic style distinguishable even in the smallest details of Wine and Spa Hotel Todoroff. Upon arrival geusts will enter an enchanting world in which only the countless magical moments take track of time.
Hotels near Brestovitsa