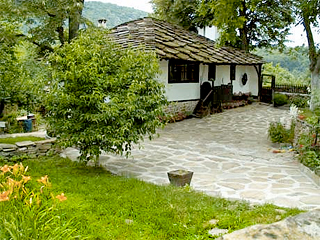 Bozhentsi is located in the Balkan Mountains, 15 km from Gabrovo and 8 km from Tryavna. According to the legend, after the fall of Bulgaria under Ottoman rule and especially the fall of Tarnovo, there were many refugees leaving the ancient capital who chose to settle in the inaccessible places in the Balkan Mountains. One of them was the widowed Boyar woman Bozhana who travelled with her nine sons. The big family settled in this place and founded the village, which still bears her name - Bozhentsi. An interesting part of the legend is another story about Racho the Blacksmith - the founder of Gabrovo, who is one of the sons of Bozhana. He set out to find sustenance in the region and thus established Gabrovo. During the Revival period Bozhentsi became an important crossroad for traders of leather, wool, wax and honey. Local people got wealthy and they started building beautiful houses that impressed with their whitewashed walls, large but enclosed porches, roofs covered with stones and lovely gardens, corner fireplaces and rich wood carving. It is from this period that about 100 houses remained in Bozhentsi aged 100 to 250 years. Therefore, in 1964 the village became an architectural reserve and it is visited annually by thousands of Bulgarian and foreign tourists. In order to maintain at a maximum the authentic atmosphere of Revival Bozhentsi, it is forbidden to construct buildings in the village that are not in the local architectural style. Among the main attractions in Bozhentsi is the St. Elijah the Prophet Church, built in 1839 which has a bell tower, something that was absolutely prohibited then and in the yard there was a church school. Among the most interesting authentic houses are the house-museum of Baba Raina, thr Mengema, the house-museum of Doncho Popa and so on. The location of Bozhentsi provides opportunities for hiking and various tourist routes start from the village, leading to different attractions in the area. A famous eco-trail is the Roman road that used to connect Nicopolis ad Istrum and Constantinople, and used to be a shortcut to Gabrovo during the centuries. Along the path there are recreation areas with tables, benches and a gazebo with information boards. Other routes lead to the Dryanovo Monastery along the mountain ridge to the villages of Kumanite and Skortsite, Marina Dupka Area and so on. In Bozhentsi every year there are children painting workshops and authentic reproductions of the custom of Koleduvane, Lazaruvane and St. George's Day. To indulge in the ancient and picturesque village atmosphere one may stay in one of the classic hotels in Bozhentsi. There are also many family hotels and guest houses that recreate the colourful ambiance, cosiness and comfort of the Revival Bozhentsi house.

Phone: +359 66 802096, +359 66 802094
more informationlocate on map
The unique Relax and Spa Centre Bojena is distinguished with its atmosphere which adequately combines past and future. In unison with the surrounding environment the complex is situated amidst a huge well-kept park. Its architecture is low and unostentatious carrying a whiff from the past times. At the same time Relax and Spa Centre Bojena offers exceptionally modern and comfortable conditions for rest and relaxation. The complex is situated right before the architectural and historical reserve Bojentsi.
Hotels near Bojentsi