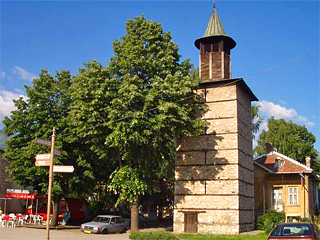 Berkovitsa is a small and beautiful town in the Balkan Mountains, situated at the foot of the Mount Kom, 23 km from Montana. The town has a rich and interesting history, but because of its beautiful scenery and climate it was declared a health resort of national importance in 1947. The first information about the town is from the 1st millennium BC when this region was inhabited by the Thracian tribe of Mizi and later by the Triballi. Some remains of the Berkovitsa Fortress were found from this time. Remains of a Roman villa from Roman times were found in the nearby village of Kalimanitsa. The Historical Museum of Berkovitsa preserves most of the artifacts found during their study. The main symbol of the town is the clock tower from the 18th century, which is an architectural monument. Other cultural and historical attractions in Berkovitsa are the house-museum of Ivan Vazov, the Town Art Gallery, and the Ethnographic Museum, the Roman bath, ancient and medieval fortress of Kaleto. There are beautiful churches in the town, too - the Nativity of Theotokos and St. Nicholas the Wonderworker. The Klisura Monastery of St. Cyril and St. Methodius is situated near Berkovitsa. The surroundings of the Kom Mount offer 12 different routes for the fans of hiking and mountaineering. It can be reached in about an hour walk. The mount itself is part of the 100 National Tourist Sites. Some of the routes are, as follows: Berkovitsa - the Mount of Kom, Haidushki Waterfalls, Klisurski Sovat Area, Prashkovitsa Area. The mountain route of the Western Balkan Mountains is paved and a marked hiking trail that starts from Berkovitsa, passes through small villages and towns and ends in Belogradchik. There is an alpine and beathlon ski track near the Hut of Kom that offers fun to winter sports lovers. The area under the mount of Kom is good for cycling, gliding and paragliding. The town guests may choose between several cozy guest houses and family hotels in Berkovitsa and those who wish to enjoy the splendor of the mountain may choose from the numerous villas and huts near Berkovitsa, situated along the routes to the Kom peak.

Chalet Kom New
Address: Gorna Koria Locality
Phone: +359 898 488568, +359 953 80426
more informationlocate on map
Chalet Kom New is one of the preferred chalets of Berkovtsa in the North-West Stara Planina. Located 15 km from the town, at 1506 meters altitude, it is a main home base for plenty of walking and trekking routes in the mountain. Chalet Kom New is also preferred by fans of skiing and winter sports as it is situated within near proximity to the ski center at the foot of peak Kom. It is very well maintained and provides various opportunities for active holidays in the mountain in any season.

Address: 2 Malinarka Street, Saraya Square
Phone: +359 889 988530, +359 888 917791
more informationlocate on map
The House of Petar Levski is located on the highest spot of the town of Berkovitsa. From there visitors can enjoy magnificent views of the town and the mountain. The villa accepts guests during the whole year and is perfect for family vacations or trips with a friend. The rooms are furnished with everything needed and they can comfortably accommodate up to seven persons. The house is for the self-independent use of its guests. It has a small tavern with a fully equipped kitchen.
Hotels near Berkovitsa