Hotels in Balchi, accommodation in villas and private rooms. Sea holidays and attractions in Balchik. 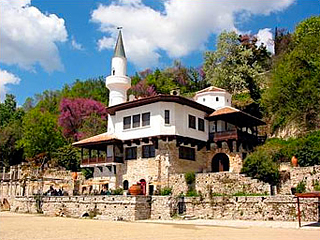 Balchik is a romantic seaside town situated on the Northern part of the Black Sea, near Albena, Kavarna and 43 km from Varna. Being picturesquely transcended above white rocks jutting into the sea, it has captured the imagination of explorers, artists, poets and writers for a long time. The legend says that its name comes from the name of the Boyar Balik who once ruled these lands. More likely, however, the name of Balchik, come from the ancient name for 'white rock'. Inhabited since ancient times, Balchik has over 2000 years of history. Being an important centre of the Thracian culture, it continues to make surprises of new and important discoveries in the field of archeology and history until today, too. One of them is the ancient temple of Cybele – Pontic Mother of Gods, found in the centre of the town. Archaeologists discovered 8 unique statues of the goddess, while the Temple itself is considered to be one of a kind in the Balkans. The interesting artifacts found during decades of exploring the town are exhibited at the Historical Museum of the town. The remains of Middle Ages fortress walls cam be seen in Balchik, as well as the church of St. Nicholas, the Ethnographic Museum, revival houses, etc. that are from the time of the Revival. Undoubtedly the greatest pride and a symbol of Balchik is the architectural park complex of Balchishki Palace. It includes the remarkable Botanical Garden with the second largest collection of cacti in Europe and the former summer residence of Queen Mary, called Tenha Yuva, or the Quiet Nest, and now widely known as the "Palace" in Balchik. This place is truly unique in its design and implementation and it reflects the spiritual aspirations, religious views and perceptions about the life of the Romanian queen. Botanic garden and the Palace in Balchik are part of the 100 National Tourist Sites and they are really worth visiting. Connoisseurs of fine art will be pleased to discover that there is a permanent exhibition of the works of Vladimir Dimitrov - the Master in the town Are Gallery. Balchik is a good place for sea tourism. It cannot boast of the golden sandy beaches of Albena and Golden Sands, but there are several different beaches, each with its own charm. Balchik has its own marina as numerous attractions are organized, such as pirate ship battles at sea, sea fishing and picnics, night cruises and so on. The entertainment for guests of the town does not end here. The central beach is the annual host of off-road racing, and some of the biggest and best golf courses in Bulgaria are located near Balchik. The town hosts many annual festivals dedicated to dance, music, film and other arts. The variety of hotels in Balchik is good. Luxury and boutique hotels function in the resort and they attract mainly the lovers of luxury and first-class amenities. Of course there are classic two-and three-star hotels in Balchik that offer modern amenities, professional service and good prices for accommodation. There are several holiday villas in the lagre Balchik Villa Zone that are preferred by travelers who seek more peace, independence and picturesque surroundings. There are also good guest houses, cheap rooms and family hotels in Balchik.

Address: 8b Primorska Street
Phone: +359 579 71130, +359 579 77017
Website: http://www.hotelmistralbg.com
more informationlocate on map
This beautiful hotel will leave everyone with the impression that one is on the Mediterranean coast of South France. Actually Hotel Mistral is located at the sea coast near the yacht wharf in Balchik. Despite the Mediterranean flair of the hotel, its design and furnishing are modern, following the latest tendencies for four-star hotels. Hotel Mistral offers everything a business and leisure traveler might need for correspondingly successful business meetings or complete rest.
Hotels near Balchik