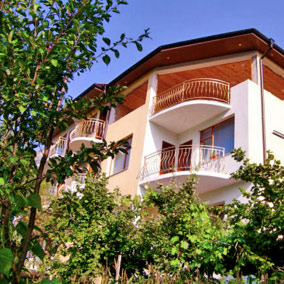 Description
Guest House Milka in Yagodina is located in a unique area, from which are revealed unique panorama views. It is a convenient home base for visiting the Yagodina cave, the Buynovsko gorge, the caves Dyavolsko Garlo and Haramiyska Dupka, the Chaira lakes. Here ever guest will discover the real magic of the mountain and will enjoy a memorable holiday in a friendly and relaxed atmosphere, warm and sincere hospitality, delicious traditional Rhodope specialties and home-like cosiness.

Guest House Milka offers accommodation in three rooms with a double be and three rooms with two single beds, with total capacity 15 beds. The rooms are comfortably appointed and have everything needed for an enjoyable stay. This cosy guest house in Yagodina features a nice tavern in traditional style with a fireplace and panorama views of the Rhodope mountain range. Here the hosts will serve delicious home-cooked Rhodope specialties, including cheverme upon prior notice. The tavern is suitable for family celebrations and gatherings of friends. For those who love traditional Rhodopean folk music the hosts will arrange live performances on kaba pipes.

Cash
Send a request to the hotel