Agatopol Fortress and other attractions in Ahtopol. Hotels nearby. 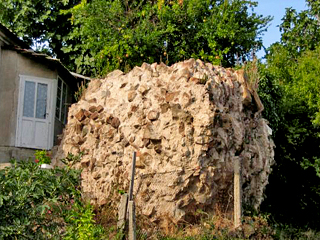 The Agatopol Fortress is located on a high rocky peninsula of the Black Sea where the present-day town of Ahtopol is located. The first settlers in the area were the Thracians in the 10th century BC, who were familiar with navigation, fishing, and various crafts, trade and they were also well-known pirates. During the 5-4th century BC a town emerged here, as evidenced by the found amphorae bottoms, decorative tiles, Hellenic fort wall, anchors and coins of that era. In written inscriptions in Greek language the settlement was mentioned as a "town" and the monuments discovered prove the existence of an Athenian colony. The ancient name of the town was Agatopolis and in the 5-7th century, after the barbarian invasions, it was quickly rebuilt by the Byzantine commander Agathon who named it Agatopol. It is assumed that the fort wall was built in the 4th century to stop the invading Slavs. The wall encircled the town and separated it from the land. At some places its thickness is up to 2.80 m, and the masonry is of stone and it is filled with mortar mixed with small stones and crushed tiles and bricks. The main gate was in its southwest edge with two turrets, 12-14 m high. Today the foundations of the fortress of Agatopol can be seen along the entire coastline of the peninsula, and in some places there are preserved parts of the wall up to 3-4 m high. There is also a Thracian fort wall found nearby that is made of larger stones glued together with mud soldering and occasionally there are three to five layers of bricks, alternating with rows of stone that are up to 3 m thick and 7-8 m high. Other historic sites in Ahtopol that may be of interest are the ruins of the monastery complex of St. Yani, located in the southern part of the cape and the Ascension Church in the eastern part for whose construction there is no accurate data, except for the date, inscribed in the alter - 1796. The interesting thing about it is the overhead lighting, with two small windows and four holes on the roof, which is typical for some of the Revival houses of the Strandzha architectural type. On the Black Sea coast around Ahtopol there is a well-preserved Roman road that once connected the Danube with Constantinople.
Hotels near Agatopol Fortress, Ahtopol