Asen's fortress and other attractions in Asenovgrad. Hotels near the fortress. 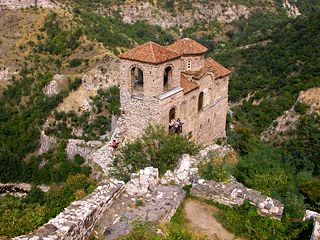 The symbol of Asenovgrad - Asen's Fortress is located 2 km from the town on an inaccessible rock of the Mogilata Ridge along the valley of the river Asenitsa. The only approach to it is protected by a wall that is 2.9 m thick, and from all the other sides, it is surrounded by steep slopes, overhanging the river Asenitsa (Chaya). On the southwest side of the rock there is a trail for riders and pedestrians which was used to enter the fortress. The first archaeological finds are dated to the period 5-4 century BC, when because of the inaccessible terrain, the Thracians made a fortification at the place. The area was inhabited during the Roman and Early Byzantine Era, and for the first time it became part of the Bulgarian state in the 9th century. Its primary function for centuries was to guard this pass on the road from Plovdiv to the Aegean Sea. It is also called Petrich Fortress, and it gave its name to the nearby Bachkovo Monastery originally called Petrich Monastery. There is written data about it in the Statute of the Bachkovo Monastery where it is called "the stronghold of Petrich" as the name comes from Greek, meaning "rock, stone." The fortress had its own administration and army, and in the years it formed a single administrative unit together with the nearby settlement of Stenimachos (present-day Asenovgrad). In the 8th century Stenimachos became a suburb of the fortress and it is mentioned as such in all printed documents. At the time of Tsar Ivan Asen II in 1230-31, the fortress went through its most significant reinforcement and expansion and because of that it was later called Asen's fortress. The studies revealed walls, an internal tower with an irregular rectangular shape, reservoirs, a church, and homes and so on. In some places the walls are preserved to a great height. The two reservoirs can be clearly seen, located near the high-trapezoidal tower which is the highest place. The Acropolis of the fortress is well-studied, as well, and occupies a few terraces. The only fully preserved building of the fortress is the church of St. Theotokos of Petrich. It dates back to the 13th century and it is one of the few preserved monumental buildings in Bulgaria from the period. It is a single nave and apse church with a dome and a triple layout of the altar. The narthex is crowned with a square dome, which reveals local architectural influences. There is another similar church in Bulgaria only in Nesebar and it's also from the 13th century. The decoration is typical of the Byzantine style - in the construction there is alternation of stones and red bricks, and a row of small niches in the wall as a decoration. The church of Asen's Fortress has two floors. Like the other churches of the period, its first floor served as a charnel house or warehouse. The actual church is on the second floor. Its frescoes are badly damaged, but what's left is priceless because the works of the monumental religious painting from this period are very rare in Bulgaria. The church was restored in stages and it is operating.
Hotels near Assens Fortress, Assenovgrad